Did you know that there are two major species of bats in the world? All bats can be placed into one of two classes: Microchiroptera or Megachiroptera. These are colloquially called “megabats” and “microbats.” Keep on reading to learn the principal differences and distinctions between them, including their appearance, habitat, diet, and much more! 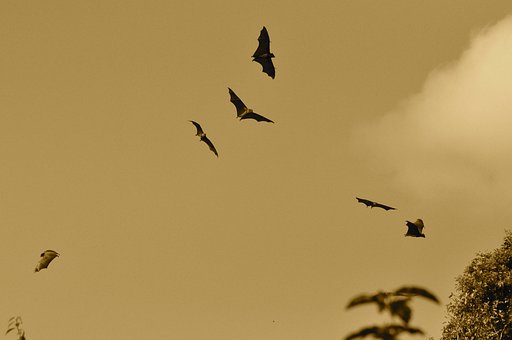 Microchiroptera, or microbats, are modest in size and have big ears. They’re echolocating mammals, meaning that they use a built in, biological sonar system, which emits ultrasonic sounds that bounce of neighboring objects and come back to the bat. Micros aren’t blind, but echolocation helps them dart and dive for prey more correctly at night.

In regards to habitat, microbats reside in moderate environments, and typically roost in hollowed trees, abandoned mines, caves, as well as in commercial and residential buildings (particularly attics!) .

This is mainly because of their frugivorous and nectarivorous diets, which chiefly consists of fruit, nectar, and pollen. Some species have been known to eat some insects, but their diet primarily consists of the nectar and pollen of blossoms and fruit. As a result of this, this suborder of bats don’t use nor maintain echolocating abilities. They do, however, have a keen sense of smell which helps them find food sources, in addition to, adapted teeth which are powerful enough to bite through fruit rinds.

In terms of appearance, it’s easy to distinguish a mega out of a micro. But, Microbats lack the claw in the second finger of the forelimb that megabats don’t have. Megabats reside in hot, tropical, and subtropical areas of the world. You’re unlikely to see wild fruit bats living in the woods of the U.S. Midwest.